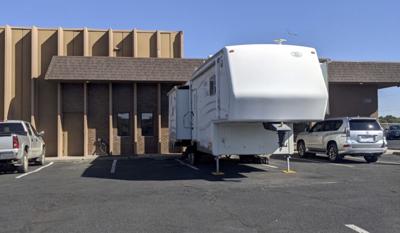 A dispute between a Pueblo Pentecostal church’s longtime recreational-vehicle ministry for traveling evangelists and city zoning will head to court.

Having been denied an appeal Tuesday night that would have allowed visiting preachers to continue parking their RVs in Christian Growth Center’s lot at 1906 N. Hudson Ave., the church will file a civil action in district court, said Colorado Springs Attorney Andrew Nussbaum.

The lawsuit will seek a review of the Pueblo Zoning Board of Appeals’ rejection of the church’s request for an exemption from the municipal code in question, along with an injunction against the city’s enforcement of the RV ordinance, he said. The church also will ask for monetary reimbursement for damages and attorneys’ fees.

The five-member zoning board voted unanimously to deny the church’s appeal by approving a city attorney’s “Findings of Fact and Conclusion of Law and Order.”

The findings conclude the board does not have the authority to grant the appeal, based on the request.

That position is incorrect, Nussbaum said.

The church’s attorneys, from the firm of Nussbaum Speir Gleason in Colorado Springs, assert in the appeal paperwork that the city has erred in its interpretation and enforcement of the municipal code against the church.

Nussbaum has argued that preventing the church from providing a set of RV hook-ups free-of-charge to traveling evangelists, missionaries and ministers who have fallen on hard times violates the Religious Land Use and Institutionalized Persons Act of 2000.

The federal law protects individuals, churches and other houses of worship from discrimination in zoning and landmarking laws and prohibits enforcement of land-use regulations that “impose a substantial burden on a church’s ministry.”

Nussbaum believes Pueblo’s municipal code gives the board the power and authority to rule on appeals and address such claims on its own, and to not do so violates the First Amendment’s Free Exercise Clause protecting the right to practice religion.

“This board must comply with RLUIPA (the Religious Land Use and Institutionalized Persons Act), regardless of any local ordinances to the contrary,” he said. “This board is duty bound to follow federal law and grant exception to the RV ordinance in order for the church to continue its hospitality ministry.”

The conflict started on May 18, when Pueblo’s code enforcement unit notified Christian Growth Center that the church was in violation of municipal code regarding recreational-vehicle parking and ordered compliance by June 16.

The city ordinance prohibits recreational vehicles from being “used for living, sleeping or housekeeping purposes when parked or stored on a residential lot, or in any location not approved for such use.”

On Sept. 13, the city began an enforcement action against the church in Pueblo Municipal Court for code violation. The church’s attorneys filed their appeal on Sept. 30, following informal negotiations that did not reach agreement.

The appeals board tabled the item at its Nov. 23 meeting until Tuesday, citing a need to consult with city attorneys.

The Rev. Paul Elder, pastor of Christian Growth Center, said at the November hearing that the RV ministry has been in place for 30 years and hosting nomadic ministers is central to the way his Bible-based church worships.

“They don’t get paid a lot so having a ministry that allows them to stay in their own homes is essential to the core mission of our church,” he told the board.

Nussbaum fights for freedom of worship.

The Intermountain Jewish News, February 14, 2022, featuring L. Martin Nussbaum Since the dawn of United States history, our country has retained as one of